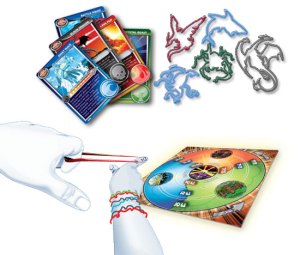 There’s a new Senario toy in town!  Just in time for the holiday shopping, Battle Bands blend two of the hottest toy crazes: shaped wristbands and collectible cards.  Battle Bands is an action board game that uses wristbands shaped liked dragons and other fantasy characters, which are accompanied by corresponding collectible cards, similar to the cards found in Bakugan and Yu-Gi-Oh!

Players shoot the bands onto the battle board to score points and simulate fantasy battles between their characters.  There is a story that goes along with the game about a faraway land known as The Maelstrom, where the elemental clans of Inferno (fire), Aquaria (water), Avalon (earth), and the Obsidian Guard from the Abyss fight for control.

As with all toy reviews, I went straight to my resident experts for testing.  My two daughters, ages four and seven, listened while I read to them the story of The Maelstrom and explained the rules.  Then they studied the cards and admired the bands, trading them and comparing them for quite a while before starting the game.  They practiced shooting the bands onto the board for about twenty minutes before my little one lost interest.  This toy was definitely geared more towards older kids, perhaps middle grades or tweens.  Boys would likely find this game more appealing than girls, particularly those who enjoy Bakugan.

My seven-year-old offered her frank opinion of Battle Bands: “I like the story.  It reminds me of The Last Airbender.  Shooting them is fun, but it’s hard to get them to land where you want on the board.  The rules are a little confusing.  The bands are really cool.  Can we get more?”

There is a Battle Bands website that compliments the game and explains the rules of engagement.