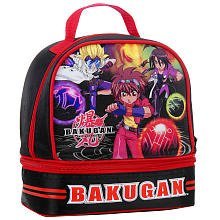 When Bakugan toys hit the market, I was asked to review the board game and some of its many playing pieces.  At the time, I had to do a little research into the background behind the Bakugan fantasy toys because it was the first that I had heard of it.  My oldest daughter, who was four at the time, enjoyed the game quite a bit, though some of the math involved for keeping score was a bit advanced for her.

Now, my three-year-old has caught onto the craze.  At 7:30 a.m. this morning, she dragged the game out of the closet (the walk-in closet that is entirely dedicated to games and puzzles and is stuffed from floor to ceiling).

A few weeks ago, when my three-year-old saw my six-year-old choosing her lunch box for first grade, our littlest one begged for her own lunch box.  Since they were on sale, I acquiesced and let her choose one as well.  I thought for sure that she would go for Hello Kitty and actually made a half-hearted attempt to point that one out to her.  However, she passed it right up, along with Dora the Explorer, Ni Hao Kai-Lan and others in lieu of Bakugan.  She recognized it on sight and grabbed it off the shelf.

“I want Bakugan,” she insisted.

What is it about these fantasy toys that appeal to the kids so much?  I think that it’s the combination of magical fantasy, good vs. evil, the manga character illustrations, and the red on black color scheme.  Clearly, it’s a hit with the girls as well as the boys.