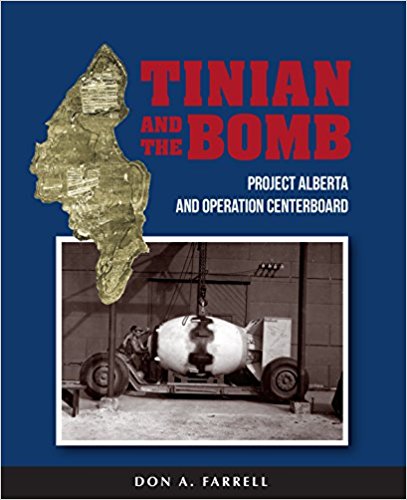 For WWII buffs or locals interested in the pivotal history of our nearby islands, there’s an upcoming book signing by Don A. Farrell that might be of interest to you.

The University of Guam Press & the Pacific Historic Parks Present:

A Book Signing and Discussion of

TINIAN and the BOMB by Don A. Farrell

TINIAN and the BOMB by Don A. Farrell chronicles the important and often overlooked role Tinian played in the atomic bombing of Japan at the end of World War II.

Join us as we continue to understand the importance of our island neighbors in the establishment of peace in the Pacific today.

One of my relatives worked with Don Farrell on a project for the Smithsonian Institute in Guam in 1979.  They did a species survey of birds and reptiles for the Northern Mariana Islands.  Don Farrell was the boat captain for that survey.  Don has written many books and articles on the history of Guam and the surrounding Mariana Islands.  I think I may have to stop by to meet him in person.