The Latest Book in my Review Pile: Liar’s Candle by August Thomas 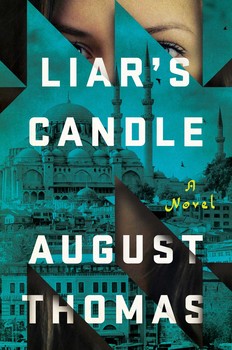 I was pretty excited to receive an advance review copy of August Thomas’ debut novel, Liar’s Candle from Scribner in the mail today.  A modern spy genre thriller, Liar’s Candle is set in Turkey.

What particularly caught my attention was August Thomas’ bio, emphasizing her passion for higher education, writing, and travel, three of my own passions.  She currently lives in Massachusetts, but she also lived in Scotland, where she completed a Master’s degree at the University of Edinburgh.  She lived in Istanbul as well, where she was a Fulbright Scholar and received another Master’s degree from Bogaziçi.  She worked as a travel writer in Turkey, which no doubt lends itself well towards basing her first novel in Turkey.

In present-day Ankara, a brutal terror attack on the US Embassy triggers a deadly 36-hour odyssey for 21-year-old diplomatic intern Penny Kessler. Penny wakes up in a hospital the day after the bombing at the Embassy’s 4th of July party to find a photograph of her fleeing the carnage is plastered across every front page. Now, everyone from the CIA to Turkey’s shadowy powerbrokers is convinced Penny holds the key to the horrible event. At breakneck pace, Liar’s Candle tells the story of Penny’s desperate struggle to free herself from a quagmire of broken alliances and backstabbing espionage that threatens to cost even more lives and shatter a precarious peace.

I look forward to reading Liar’s Candle.  Please keep an eye out for my upcoming review.