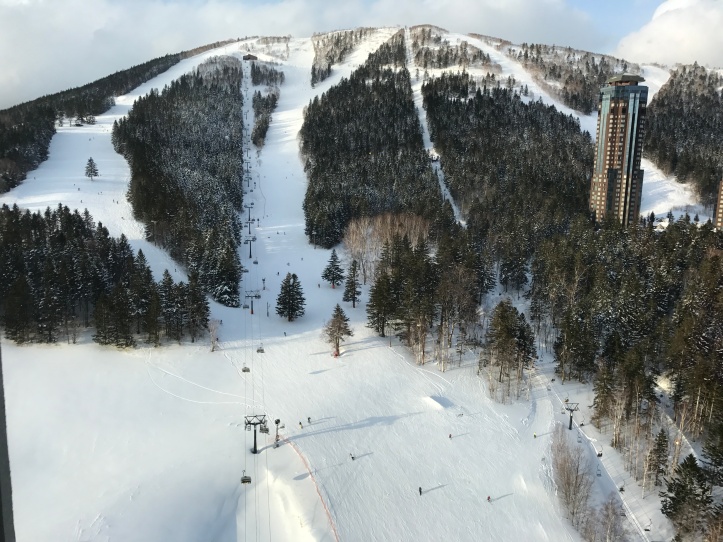 We recently went skiing in Hokkaido, Japan with a large group of friends and coworkers.  The person who arranged the trip negotiated a great deal on rooms, breakfast, and lift tickets at the luxurious Hoshino Resort in Tomamu.  Our family room was extremely spacious with four comfortable Japanese-style beds along the floor, a living room area, two full bathrooms, and expansive views of the ski area.

There were a variety of restaurants throughout the resort area, a complimentary happy hour in the lounge every evening, an ice village, an indoor wave pool, and several full-service spas.  They did a good job of catering to kids with play areas, sledding hills, a bunny slope, numerous long slopes for every skill range, and a variety of ski lessons available.  The hotel also had a nice daycare facility for childcare, although I was told by friends that it was extremely expensive.

There were never any lines to get on ski lifts, and we enjoyed beautiful sunny weather with almost no wind, though the temps were quite cold, of course.  Hokkaido gets almost limitless amounts of snow during the winter season with an annual average of 45 feet.  To put that into perspective, Breckenridge, CO gets an average 14 feet of snow per year.  The Hokkaido ski resorts never have to make artificial snow the way so many of the American ski resorts do.

My 10-year-old daughter absolutely fell in love with the skiing in Tomamu, and within a day, I could barely keep up with her.  She marveled at how massive the ski resort was compared to the tiny man-made ski area of Wilmot in Wisconsin, where she learned to ski.

My 13-year-old daughter learned to snowboard for the first time.  She picked it up quickly and absolutely loved it, but as with all new snowboarders, she fell a lot.  That, plus another nasty spill while walking around the Ice Village one night, resulted in a buckle fracture in her arm that required a cast when we got back home.  Fortunately, she has a very high pain tolerance and rarely complained.  Despite the swelling, she insisted it barely hurt and was more than a little annoyed that we had to drag her to four different doctor appointments over a six day period to have it taken care of.  (That’s medical care in Guam for you!)  Nothing slows that girl down for long though.  She’s leaving tomorrow to hike the Milford Track in New Zealand with her Dad as a special Daddy/Daughter trip.