My 10-year-old daughter has been reading the Harry Potter book series, and as a special Mommy-Daughter trip last week, we went to Universal Studios Japan in Osaka, so we could go to Harry Potter World.  Our hotel concierge helped us buy admission tickets and express passes to Universal Studios in advance, which was a huge help, since they sell out of express passes before the park opens each morning. Only a few travel agencies are approved to sell express passes in advance, and none of them are located in Guam or the U.S., so I don’t think this was something we could have easily navigated on our own.  We were grateful to have them, as it saved a lot of time once we were inside the park. The Universal Japan Express Passes didn’t allow express entrance onto every ride, which was a bit of a disappointment, but since most of the lines were insanely long, it was still helpful to have them. I wish it would have included express entrance into the park too. Once the gates opened, we still had to wait in line for about 45 minutes just to get inside.

For those of you who have never been to Harry Potter World at Universal Studios, the most important thing is to get there when the park opens and head straight to the automated machines in the center of the park that dispense your assigned entry tickets into Harry Potter World.  Without them, you aren’t allowed into Harry Potter World, and they do run out of them before the day is over.  Be sure to select the earliest entry time  you can. While they monitor the number of people who are allowed to enter Harry Potter World throughout the day, they have no way of making them leave. Many people don’t leave that area of the park all day long, so it grows increasingly more crowded as the day wears on. The highest level of Express Pass assigns entrance into Harry Potter World, but you can still try for an earlier timed assignment once inside the park.

The rides at the Japan park are slightly different than the ones in Orlando. There’s no Dueling Dragons rollercoaster in Osaka, but there is a small Ride of the Hippogriff coaster appropriate for younger kids who don’t like the large rollercoasters. The Harry Potter and the Forbidden Journey™ in 4K3D ride is a visual bombardment, and I wish I had taken some motion sickness medicine before going on it. The line meanders throughout Hogwarts castle, but all the character presentations are in Japanese, so those of us who don’t speak Japanese miss out a bit on this ride. It was interesting to see Dumbledore speaking Japanese though.

The highlight of our day was Ollivander’s Wand Shop.  My daughter was chosen for the wand selection demonstration, which absolutely thrilled her down to her toes.  Ollivander kindly spoke both Japanese and English to her, as he helped her select her perfect wand match.  Something new to Harry Potter World at all the Universal Studios parks is the opportunity for kids to learn and cast spells with their wands at different locations.  Upon purchase of her wand at Ollivander’s, she was given a map outlining different points where she could work magic, from making things move to creating fire and snow. Staff members were on hand at each spot to teach aspiring spell casters the proper words and wand movements to invoke each incantation.

Be sure to grab a butterbeer or lunch at the Three Broomsticks while in Harry Potter World. We loved the butterbeer, a nonalcoholic drink similar to rootbeer with a butterscotch flavor, topped with a bit of whipped cream.

When we got home from our trip, our copy of the newest J.K. Rowling release, Harry Potter and the Cursed Child, was waiting for us. 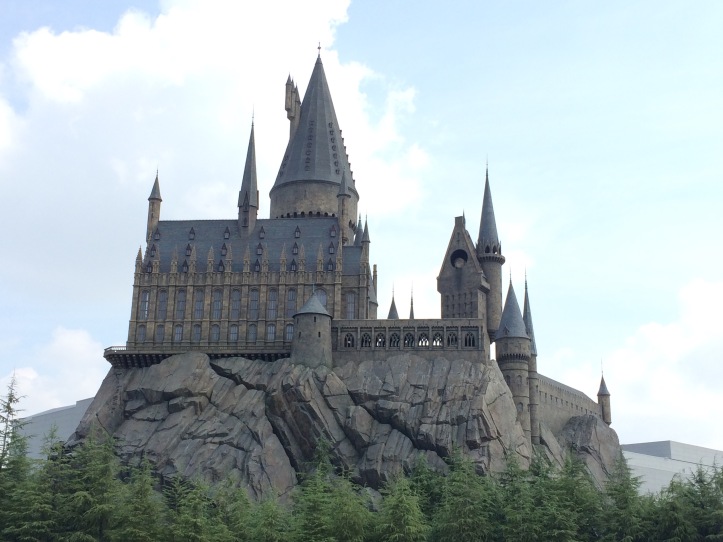