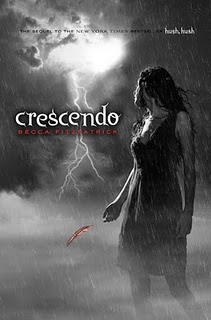 Crescendo is the sequel to Becca Fitzpatrick’s novel, Hush, Hush.  This young adult fantasy continues the story of teenager Nora Grey, who once again finds herself in danger, caught in the struggle between fallen angels, archangels, and nephilim.  In this second installment in the series, Nora finds herself questioning her relationship with angel bad boy Patch.  While openly using Scott (a childhood acquaintance turned dangerous hottie) to make Patch jealous, Nora finds herself seething as Patch grows closer to her high school nemesis, Marci Millar.  To further complicate this teenage melodrama, Nora catches glimpses of her dead father mysteriously popping up in unexpected places.

The premise of this book is fantastic.  Archangels, guardian angels, fallen angels, and nephilim all battling for turf should no doubt take center stage in the plot.  Where it goes off track, however, is in the teenage angst.  About four out of every five pages are devoted to Nora pledging to love Patch for all eternity, and then breaking up with him two seconds later, only to regret it and wish she had him back, while pushing him away with her words and her actions in almost every scene.  The relentless relationship drama was, quite frankly, insulting to readers of any age, particularly teenagers who don’t fit the irrational melodramatic stereotype.

The storyline itself was intriguing and managed to build tension and keep me engaged during pivotal scenes.  If only there weren’t constant diversions into Nora’s whining about her love life, it would have been an utterly enjoyable read.  It seems that if she were halfway intelligent or had any sense of survival instinct, Nora would perceive the danger she was in and would consider that fact more important than stopping to wonder whether or not Patch was thinking about her.

“Vee? Mom?” At the edge of my vision, I saw another shadow slink through the fields. Sucking in a steadying breath, I reminded myself there was no possible way that I was in any true danger. Patch might not be my boyfriend, but he was still my guardian angel. If there was trouble, he’d be here. But even as I thought it, I wondered if I could count on Patch for anything anymore.

There seemed to be less of the romantic focus in the first book, Hush, Hush.  The captivating paranormal characters combined with Fitzpatrick’s ability to build tension and keep readers on the edge of their seats in action sequences promises much potential for the series as a whole.  I certainly hope that there is more focus on the plot and less time spent on insecure romantic entanglements in future books in the series.