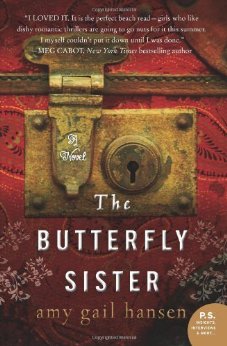 Amy Gail Hansen’s debut novel, The Butterfly Sister, hits bookstore shelves on Aug. 6, and I encourage readers to reserve their copies now.  This literary suspense and tale of self discovery, published by HarperCollins on their William Morrow imprint, is sure to be one of the bestselling books of the year.

The story centers around 22-year-old Ruby Rousseau, who receives the delivery of a suitcase belonging to Beth, a former classmate from college.  As Ruby attempts to return the suitcase, she discovers that Beth has disappeared.  While her curiosity as a journalist is piqued enough to search for clues, Ruby’s own dark past forcefully collides with her present, unraveling an almost dreamlike tale that makes her question the reality and validity of her perceptions and choices.

The prose is artful as it unveils Ruby’s past in New Orleans and her history at Tarble, the women’s college she once attended and eventually fled.  The pace is well-timed, as multiple plot twists unfold.  It was a difficult book to put down, and one that left me sad that it was over, even as it tied up the ending in such a beautifully chilling way.

The mug slipped from my hand then and shattered on the floorboards at my feet, the remaining drops of tea seeping into the porch cracks. “Mrs. Richards, I’m so sorry. I had no idea. I mean, Beth and I weren’t close. I mean, we just kind of knew each other,” I rambled. I wanted to pick up the mess, wanted to say something more appropriate but couldn’t formulate the words.

“The police say they have no leads,” Mrs. Richards continued, as if she hadn’t heard me. “The said ‘Hope for the best and prepare for the worst.'”

Prepare for the worst. Beth Richards was missing but hopefully not dead, hopefully not like the hundreds of people I’d written about at the Chronicle. I told Mrs. Richards I was sorry once more.

“No, Ruby, don’t you see? They were wrong. Because this is a lead. This could be how we end up finding her.”

If you enjoy a good mystery, women’s literary fiction, or just the unraveling of an unusual and intriguing story, I recommend The Butterfly Sister by Amy Gail Hansen.