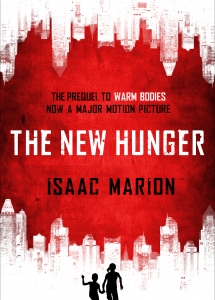 Zombies seem to be taking over lately, thanks to authors like Isaac Marion.  The trend seems to be towards film and television adaptations of popular novels.  Some examples include Max Brooks’ World War Z and Robert Kirkman’s The Walking Dead.  Isaac Marion’s first zombie novel, Warm Bodies, was made into a movie and released this past year, one of the few that actually incorporated dry humor and a love story into this genre, which made it a little more light-hearted than most.  Click here to read my review of the book and here to read my review of the movie.

Marion recently released The New Hunger, a prequel novella to Warm Bodies.  In this story, we catch a glimpse into the downfall of society in this disaster-torn world.  The characters include 12-year-old Julie traveling the country with her parents in search of a safer place to settle down, 16-year-old Nora looking after her younger brother as they flee from zombies and try to survive after their own parents abandon them, and the newly awakened zombie R who wanders as he tries to figure out who he is and what he is.

“It’s more eerie to be alone in a city that’s lit up and functioning than one that’s a tomb. If everything were silent, one could almost pretend to be in nature. A forest. A meadow. Crickets and birdsong. But the corpse of civilization is as restless as the creatures that now roam the graveyards. It flickers and blinks. It buzzes to life. “

As with Warm Bodies, Marion weaves a glimmer of hope into the theme of the story, despite the gruesome circumstances.  I particularly appreciated the character development behind a young Nora, my favorite support character from Warm Bodies.  For those who appreciated the book or the movie Warm Bodies, The New Hunger is a must read.  It can be downloaded as an eBook at Zola Books.