Book Review: Archon: The Books of Raziel by Sabrina Benulis 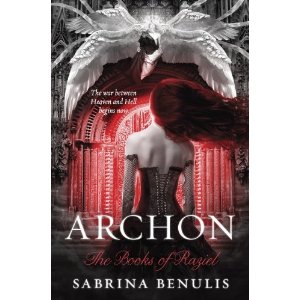 Sabrina Benulis’ debut novel, Archon: The Books of Raziel, has a an intriguing premise based on angels, prophecies, and the ultimate ruin of the world.  When I was sent this book for review, I found it tempting enough to move it towards the top of my review pile.  Unfortunately, it didn’t quite live up to my high hopes.

While the concepts were original and some of the dark characters enticing on the surface, the plot was erratic and the multitude of characters didn’t seem fully developed.  There was plenty of potential with which to work, including an intricate hierarchy of angels, demons, jinn, a coven sorority, and a Vatican that had a hand in nurturing or controlling much of this fictional world.  However, when it came right down to it, there didn’t seem to be enough depth to the characters to make me feel invested in them.  There were so many characters (several of whom went by more than one name), that it never clearly focused on any of them quite enough.

The central character, Angela, was released from a mental institution and then entered a university campus run by the Vatican.  She was admitted because she was a “bloodhead,” possessing both fiery red hair and a potential for supernatural abilities.  She dreamed of angels when she slept, and then painted them, as their memories haunted her every waking moment.

“While most of her paintings remained hidden away in their portfolio cases, two of them hung on the walls, portals to either a dream or a nightmare, whichever happened to suit her fancy at the moment. She felt a kinship to both of them, one day aching for perfect beauty, and the next, for a grayness that wiped away her soul.”

Though I had a few criticisms, I still found that I couldn’t put this book down.  It held promise, and I kept holding out hope that it would surprise me in the end.  Sadly enough, it did not, and I still felt slightly let down when I finally read the last page and closed the book.  I’m always fascinated with stories about angels, and Benulis’ interpretation of angels was certainly one I hadn’t yet read.  I expect that the series will improve as it moves on and will keep an open mind when the next installment is published.