C2E2 Kicks Off with a Bang

The first day of the Chicago Comics and Entertainment Expo, otherwise known as C2E2, featured graphic novelists, artists, publishers, and other industry professionals at the McCormick Place Convention Center.  Here’s a sampling of some of the events that were on the schedule for the first day:

Publishers were selling graphic novels as well as giving away comics and other freebies in the exhibit hall.  Authors and artists were available for autographs and sketches.  For the graphic novel fan, C2E2 offers a veritable buffet of products and opportunities to meet the creators behind the comics.  No one who attends this convention should leave the exhibit hall empty-handed.

At the Archaia display booth, I had the pleasure of meeting David Petersen, author and illustrator of the Mouse Guard series.  Mouse Guard features characters who are (as the name implies) mice in the roles of knight-like heroes fighting the good fight with fierce bravery and skill.  While many of the graphic novels featured at C2E2 are geared toward adult audiences, Mouse Guard is one of the books that is also appropriate for younger readers.  Petersen’s artwork is delightfully detailed and perhaps the most engaging aspect of Mouse Guard.

Also at the Archaia booth was Nick Tapalansky, author of the graphic novel debut, Awakening.  The main character is a detective who displays Mulder-like scientific skepticism, while being confronted with shocking evidence of zombies terrorizing a small town.  The dark multi-media artwork of Alex Eckman-Lawn add to the spine-tingling effect of the story. 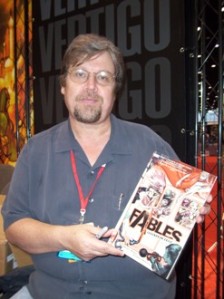 The person who stole the show for me was Bill Willingham, the creator of the Fables series of graphic novels.  He was approachable and friendly, making jokes and teasing me a bit while personalizing autographed copies of his books for me.  The Fables series features characters based on traditional fairy tales who fled from their own mythical homelands to New York, where they live disguised as ordinary residents amongst their more mundanely human neighbors.  The writing is intelligent, putting a freshly modern and surprisingly different spin on the traditional fairy tale characters.  The world that Willingham creates is consistent and plausible, while being a fanciful escape from the ordinary.  His characters have depth, and the complementary artwork in each volume of the Fables series brings life and varied dimensions to the captivating stories.  Bill Willingham’s Fables series and its spin-offs are an excellent choice for both the devoted comic fan as well as the graphic novel neophyte who might be interested in getting his or her first taste of this genre.