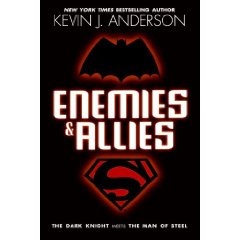 In Enemies & Allies, New York Times bestselling author Kevin J. Anderson brings Superman and Batman together to team up against super villain Lex Luthor.  This full length novel is set in the 1950’s, during the height of both the Cold War and the alien invasion movie craze.  Both of these factors are incorporated into the story, along with many of the contemporary events and world leaders of the 50’s.

Anderson stays consistent with their comic book characters for the most part, identifying Superman as a by-the-book law-abiding citizen and Batman as a vigilante willing to break the rules to do what he feels is right.  The tenuous alliance created between these two superheroes makes the reader want to cheer them both on, while still believing that their relationship and their philosophies would be somewhat tense and at odds.

Some of the plot details yield minor inconsistencies.  For example, Perry White, editor of the Daily Planet newspaper, forbids reporter Lois Lane from leaving the city of Metropolis for a story due to budgetary restraints, yet she conveniently appears in Gotham City the next day to interview billionaire Bruce Wayne for an article.  Also, some of the timeline events of the 1950’s don’t quite mesh.  Ultimately though, these small details do not detract from the overall story, which focuses more on superhero action than on setting.

Dressed in red and blue, his cape streaming behind him, Kal-El shot out of a window on the opposite side of the building.  Right fist extended, he soared into the sky, circled the rooftop’s golden sphere with the orbiting words “Daily Planet,” then raced toward Metropolis harbor.

Though it is a story that stands on its own — with a distinct beginning, defined Cold War and alien invasion conflicts, and a cohesive ending — the book reads similar to a comic book, in that certain assumptions about the super heroes are already present, as if it were a continuing episode in an ongoing saga.  In most cases, Superman and Batman are well established characters in the minds of readers before opening the book.  Also, the conflicts that arise in the book are limited to specific events and a particular period of time, yet we assume that Lex Luthor will continue as a villain, just as both Batman and Superman will continue to flourish as superheroes.  Because of this, we could conceivably look forward to future installments in the continuing story, be they comic books or full length novels, while we still appreciate this book as just one more volume in the overall tale.

Kevin J. Anderson has authored numerous books including The Last Days of Krypton and the Saga of the Seven Suns series.  He has also paired with author Brian Herbert to continue Frank Herbert’s Dune series with books that include Paul of Dune, The Butlerian Jihad, and The Winds of Dune, to name a few.