When I was sent Felix the Comet for review, I was in the middle of moving halfway around the world and had a neglected pile of review books already awaiting my attention.  However, since it was written by Cathy Coley, a friend of mine whose writing I know I enjoy, I moved it to the top of my list, and it did not disappoint. 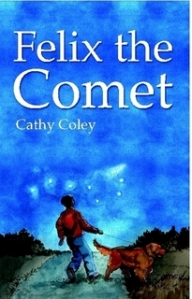 This novel, geared towards middle graders, touches on the topics of astronomy and a young boy coming-of-age, as well as the serious and prevalent theme of handling a school bully.  Felix, the main character, had two best friends, did well in school, and shared a close bond with his dog Cosmo.  He was an enthusiastic and optimistic kid until the new boy in school began to single him out and bully him.

While he was trying to figure out how to cope with the bullying on his own, Felix began to bicker more with his little sisters and even push away his best friends.  Like many kids, he didn’t want to alert an adult to the situation, and he tried his best to handle the situation on his own.  In the midst of this stress, he stumbled upon an amazing discovery, but his sense of victory was overshadowed by the bullying he continued to endure at school.

The clock on the wall ticked louder every second. He just looked at the floor, knowing that if he got caught in her gaze, he’d tattle. And that was the last thing he wanted to do. It was just name-calling after all. It was stupid for him to be so upset, right?

What I like about this book is that the bullying and Felix’s reactions to it felt realistic.  Even though Felix’s discovery was a bit fanciful, it was also a fun component to the story that is sure to lure the interest of many young readers.  I appreciated the ending because, again, it had a realistic feel to it.  The bullying situation wasn’t “magically” solved, but it had a more real-world quality of Felix learning to open up to and accept support from those around him.

I have two middle grade daughters, and I will be sure they read this book.  Its topic is not only relevant for most any school-age child as well as their parents, but it’s genuinely a fun story to read.  It inspires the imagination while also dealing with the realities of bullying.

Leave a Reply to A Lovely Review of Felix the Comet | Cathy Coley, Writer Cancel reply