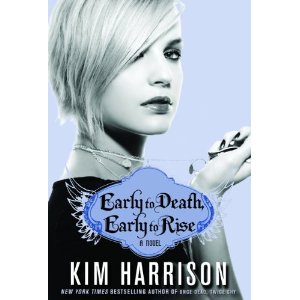 Early to Death, Early to Rise is the second installment in Kim Harrison’s young adult series about angels and grim reapers.  The first book in the series, Once Dead, Twice Shy, became an instant New York Times bestseller as the debut young adult fantasy novel for Harrison.  Click here to read my review of the first book in the trilogy.

Grudgingly accepting the role of the Dark Timekeeper in charge of the dark reapers, recently dead teenager Madison Avery bucks the celestial system of fate and free will to do things her own way.  Madison and her team of unlikely heavenly cohorts determinedly bumble their way through reaps, trying to do the right thing, while learning that circumstances in life rarely fall neatly into the categories of black and white.

“I cringed, waiting for Nakita to crouch down, but she just kept walking.  Nakita was my official guardian, assigned to me by the seraphs.

Technically, as the dark timekeeper, I was her boss.  Although in all things earthly I was the smart one, she knew my job and what I was supposed to be doing.   Trouble was, I didn’t want to do it heaven’s way.  I had other ideas.”

As with Kim Harrison’s bestselling Hollows series, the characters in this Madison Avery series are quirky and comedic, balancing a spunky sense of sheer force of will with a seemingly innocent charm, making them both human and likeable, in spite of all the unlikely supernatural phenomenon occurring around them.  The story line of angels and reapers is a welcome fresh breath of air in the fantasy genre.  Being on the forefront of this new type of fantasy character, Harrison makes the rules as she goes along.

While the first book in the series, Once Dead, Twice Shy, read as a little sloppy, introducing and weaving a storyline drawn from a previous short story found in the young adult fantasy compilation Prom Nights From Hell, this second installment in the series, Early to Death, Early to Rise, displays characters who are more purposefully developed and who appear more believable and life-like on the page.  Though the angelic messenger, Grace, reminds me a bit of Jenks from Harrison’s Hollows series, the rest of the characters are both original and entertaining.  I especially appreciate that the main character, Madison, is not your average whiny love-sick teenage girl found in many books in the young adult genre.  Rather, she is just independent and rebellious enough to attempt forging her own path among the timeless heavenly realm.

Note: An originial version of this article was first published as “Book Review: Early to Death, Early to Rise by Kim Harrison” on Blogcritics.org.